I read an article on dealsnews (its gone) about why you should not buy a Chromebook and after seeing the ads of Microsoft (more) I’m pretty sure they are just sponsored to give out such bad advice. Don’t get me wrong, I’m not against Windows laptops, I love my Dell Windows machine, Its just, it doesn’t get much action anymore since I have my chromebook. But first, lets attack the now removed post for posting such well … crap.

The price, the speed.

The latest Chromebook is Cheap, but low-performing

They are cheap alright, I can buy locally from 250 euro, if I search online I can go as low as 150 dollar. That is clearly a win right ? But low-performing, well, I felt pretty much the other way around, when I first started using Chrome OS, I had the feeling the OS was waiting for me, rather then the other way around.

I work close to informatics and when I say I use allot of tabs, its rather relative (they have open 50+ tabs), the reference CNET article about Lenovo IdeaPad 100s shows as low as 8 tabs open and already the machine is lagging. This is not in line what with most Chrome OS users see, I normally have open around 10-15 tabs, including spotify, gmail, facebook and some other sites that require les resources compared to those, however no matter what use case, I never noticed lag… I can’t find any way to create lag on this machine…  and this machine “only” has 2GB/Intel Celeron 2955U. Now I’m not sure how that compares to the N2840 reviewed there, but sure we aren’t shooting at windows 10 cause it runs slow on that xp machine you had 10 years back ? From what I can see the Lenovo ideapad 100s Chromebook is definitely on the low-end spectrum, but then again, not everyone needs 50 tabs open. 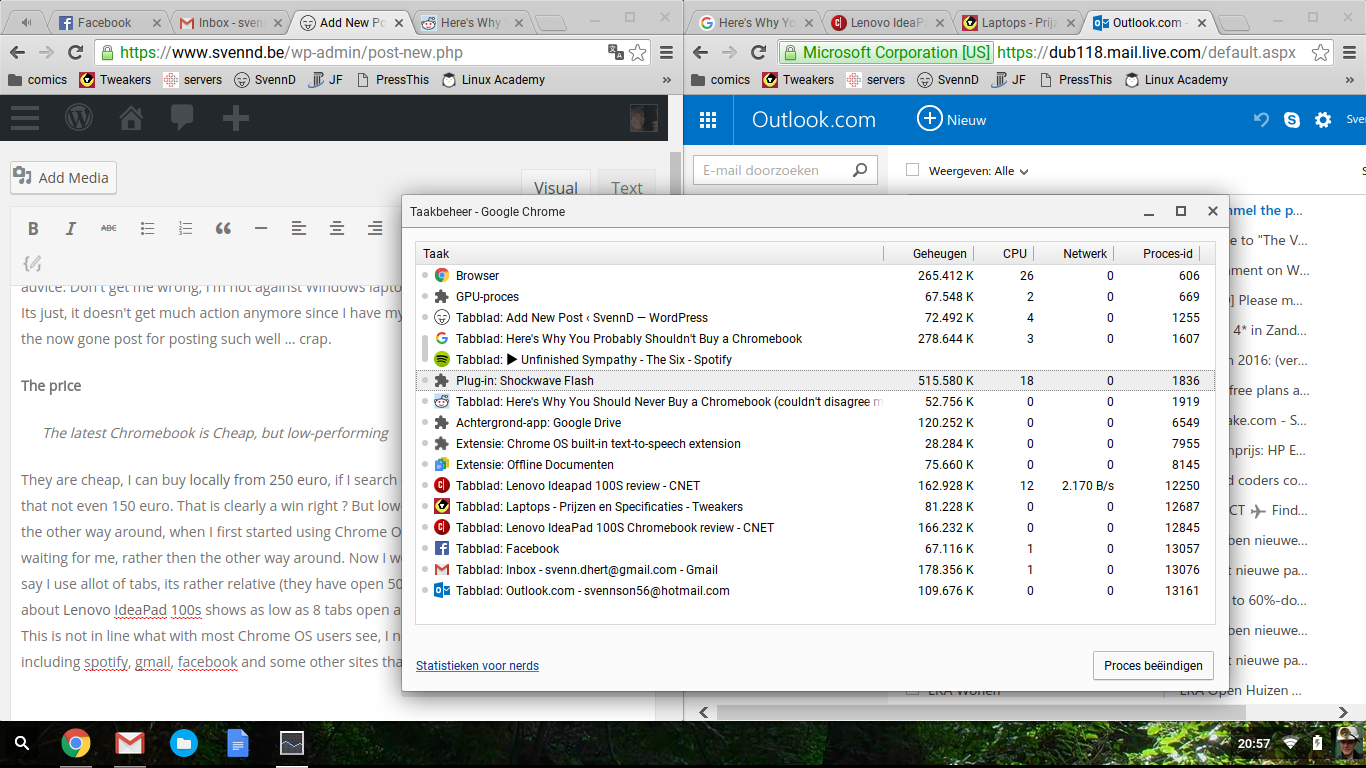 The point is also made that without WIFI not much is to do, I always counter this remark with and Windows is so much better of with no internet ? its not even true, i use my Chromebook for 90% of the time off WIFI. While you can’t google when your off the internet, the same kinda goes for Windows or MAC doesn’t it ?

Now about the price, always reviewers compare against low-end windows machines, I wonder why. Did people ever compare smartphones against computers ? Since when did we start caring about how much stuff costs ? Or do you mean to tell me you REALLY need that 500$ phone ?

For the same price you could get a full operating system

This is where the article clearly is aimed at people not knowing what an operating system is, an OS is the software between the hardware and the user applications. Exactly what Chrome OS does … now one could argue that the user-space application is locked down compared to Windows, but that doesn’t make good titles does it… definitely not when you have to tell people that its way more secure because of that, compared to the big W.

Although there is a point to be made, Chrome OS is not a full blown work-machine, it took a specific part of what we do for about 95% of the time and tries to be the best at that : web-browsing. But to take on the elephant in the room, also documents, sheets and presentations can be made and edited offline/local, also video’s and pictures can be seen/edited offline… but besides that, you will probably need to look for online solutions or extra apps.

Spend more and get more

Spend a little more and get better storage

Spend $70 more on a $200 machine, that 35% more …. but lets not get on numbers, they suggest 500Gb spinner* machine, to counter the 32Gb/16Gb storage on chromebooks, now I can tell you 16Gb is allot of documents and presentations. Although if you plan on storing your photo collection there might be better solutions, most people do mighty well with an external drive at home or even on the road. I for example love to watch series, so I bought myself a 64 Gb USB stick … at home I have two 4TB spinners … why would I wanne take the risk of dragging this with me ? all that data ? Although, I believe a slightly larger SSD might be easier for people with allot of apps or crouton, like myself. 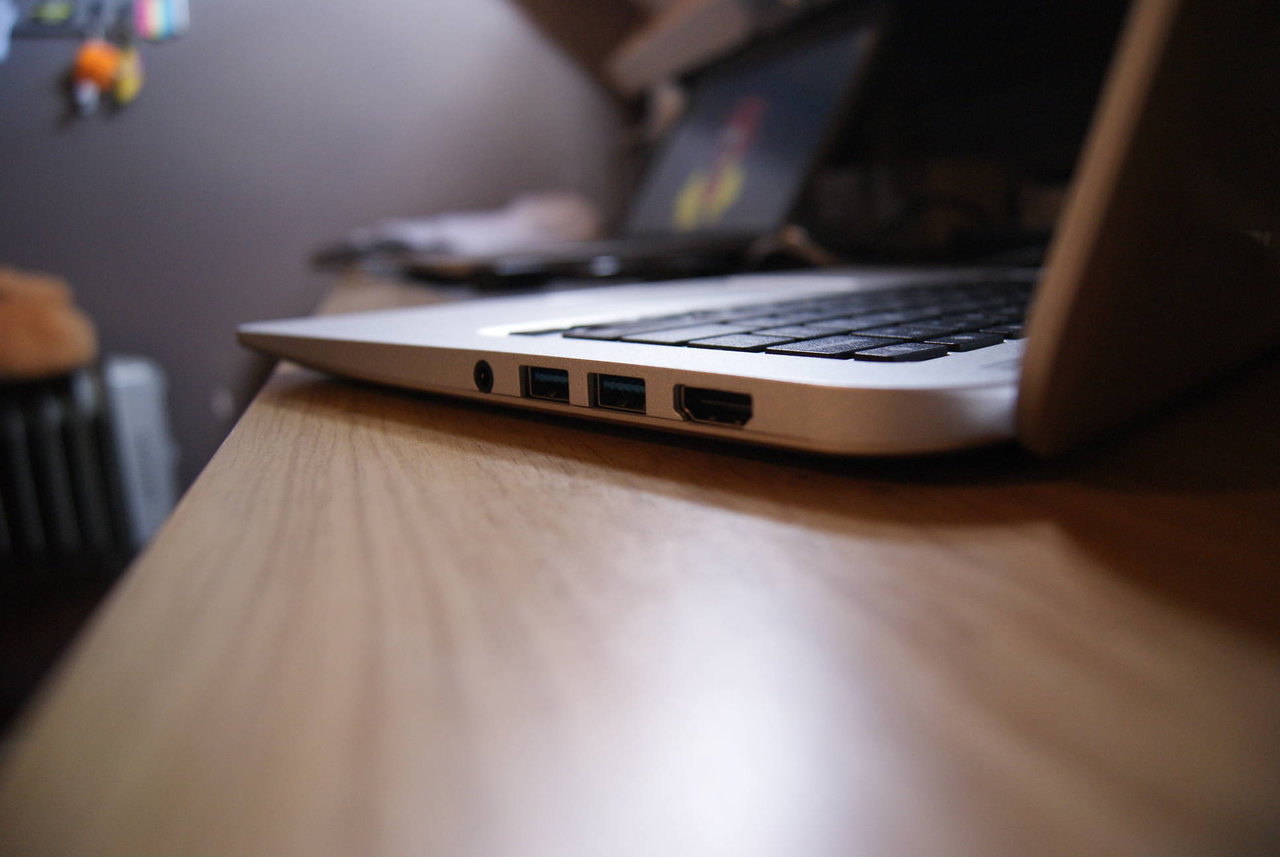 Chromebooks are not for everyone, they are good for a few specific tasks, for those purposes they are perfect. But as the saying goes, you don’t bring a knife to a gun fight … Chromebooks are not aimed at gamers, graphic designers, 3D artists, hipsters, …. they are aimed at common web users, in that they excel, there ease of use is huge compared to anything I seen in a long while.

I am off course biased, I own a Chromebook, this reviewer never seen a Chromebook from up close and as such was also biased. Sadly she crapped all over herself, by using fanboy arguments. Now I’m not so stupid to think that I will right all the wrongs about Chromebooks by myself, (on the internet) but before you argue how shitty a Chromebook is try it first and then join me in not understanding why we love these little guys so much.