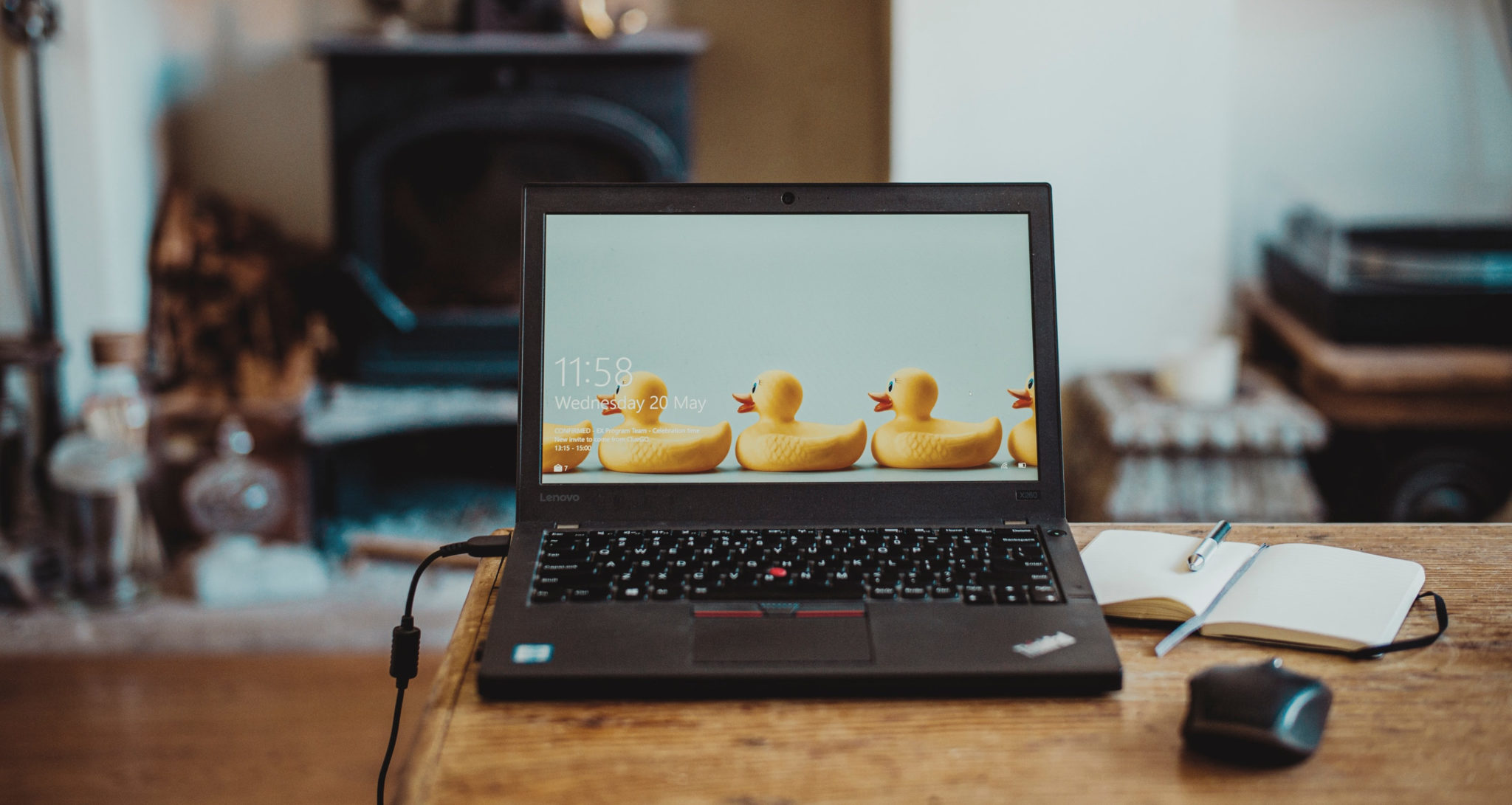 KeepAlive on or off ? Apache Tuning

Only recently I have been looking into optimization of webserver. In that search I have found some really low hanging fruit, such as keeping the byte-compiled PHP version of a file in memory, using Zend Opcache or the now deprecated APC.  I even started thinking in some very unconventional ways, such as hybrid static rendered pages/blog. Only a few days ago I saw a presentation on HTTP/2, something until now, my brain had marked this as not applicable/uninterested/ignore until further notice. Yesterday however that changed, a presentation at ma.ttias.be boosted my interest for the lower level (for me) of how the http protocol worked and why there are so many version out there. Now I am no expert and not going to be one for some time, but what hooked me is the parameter Keep-Alive.

**Keep-Alive
** In technical terms Keep-Alive is a method to re-use a TCP connection. When a connection is created, the client, will send some setup value (SYN) to the server, who will respond with an acknowledgment (SYN ACK). This is done every time before a clients sends its requests to the server. While this in itself is only a small amount of the time, websites these days have a ton of resources (images, js, css, …) this might add up quit some requests each having to setup a connection. While in HTTP/1, it was strictly one resource one connection -unless defined otherwise in the header-, in 1999 a finalized HTTP/1.1 saw light, the major improvement was the addition of HTTP persistent connection (aka Keep-Alive) and HTTP pipelining.  With Keep-Alive enabled on the server, a compatible client will continue to re-use the same connection for requests. This can be used to shave off some time spend in TCP connection setup. 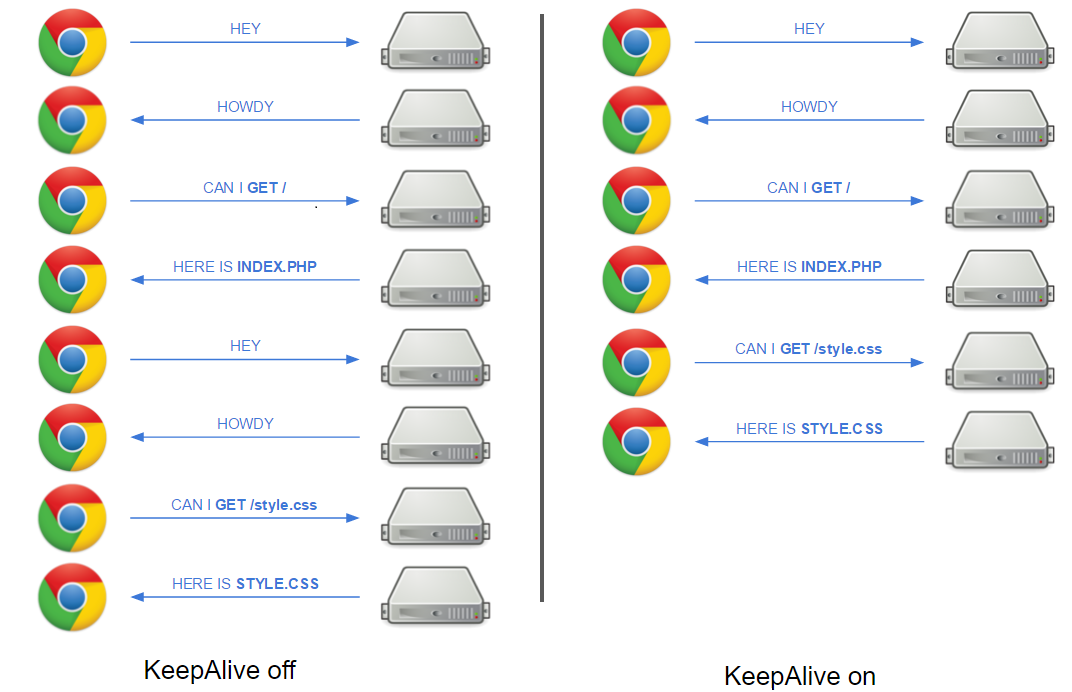 How much** time can I win with this ?
** Any speedup is always relative and will vary depending on allot of variables, many of which are out of your control. But to give an idea, I created a page with 20 CSS files and tested an Apache setup with KeepAlive on and off. I would expect (read:prediction), a speed increase equal to the ping time for each connection that is not needed because of Keep-Alive. Modern browsers will create 6-8 connections per domain to get the resources faster, independent if Keep-Alive is on or off (that is why people shard* btw).

There are 21 files to be downloaded (Index.html + 20CSS) That means that 7 browser connections would need to download 3 files each. So if all the resources are downloaded within the KeepAliveTimeout (I will get to that) That means that my Keep-Alive would require only 7 connections and my not Keep-Alive site 21. So in essence I win 14 TCP connections, at least if enough MaxKeepAliveRequests are available. (I also will get to that) Considering I need an extra roundtrip to the server for those 14 extra connections, a ping time would be a good indication. (I guess) Since I live rather close to my server I get ping times of around 10-20 ms, that would equal 2014 = ~280ms of speed gain. This is a huge amount on a static page time.

Keep-Alive off, clearly see the connection setup before each TTFB (time to first byte)

Clearly 6 connections do create the connection, all the other use the existing connections.

This is google’s chrome browser, but in case you don’t have this browser here is a overview of the colors : 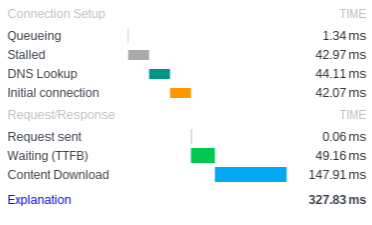 Keep-Alive off : 1190 ms, Keep-Alive on : 588 ms, a speedup of 602 ms ! Now to be honest, I cherry picked this example, most requests for Keep-Alive off are ~800ms and the Keep-Alive on in are ~600ms. This is close to what I was expecting, around 200 ms gain. Obviously this was on a static example, dynamic pages will be slower and most likely bigger in size. Hence the % speedup will be a lot lesser.

**So what are the disadvantages ?
** The disadvantage of using Keep-Alive is quite simple, it uses resources that might not be required. When a connection is open on Apache all of the resources remain ready to “answer” even when there will never be another request. This is mostly memory wise a problem. For Apache memory has always been a bit of an issue, hence popularity of Nginx and the sorts. However, most guides will advise against using Keep-Alive when memory is tight, I’m not so sure that’s the best advice to give though. KeepAlive on Apache is restricted by a few settings (read below) that can be tuned to your use profile. Hence it is even be possible with little memory to use this speedup.

**Settings to tune
** The settings are located in /etc/httpd/conf.d/httpd.conf, for Centos (Fedora, Red Hat,…), although its advised to use the /etc/httpd/conf.d/ directory so that newer versions of httpd (aka Apache) don’t overwrite your config. For Debian and friends (Ubuntu, Mint, …) the file can be found at /etc/apache2/apache.conf. On a second note, make a backup of the config before editing. (this goes w/o saying, but these kind of tweaks are easily forgotten)

When to use Keep-Alive

You have a VPS with limited memory (512 Mb, 1Gb) and visitors don’t come in one clear peak.

You have a dedicated server with allot of memory (you have “free” memory under free -m) and visitors come in peaks.

Keep-Alive can help you speed up your website by quite some time, but its not a magical switch, there are consequences to using it, although I think these can be for a large part be circumvented if suited settings are used. It is interesting to see that in HTTP/2 both Keep-Alive and HTTP pipelining are on by default, in fact they are part of the protocol.