Rsyslog is one of those tools that is on every modern Linux distro, but I never got to read the manual about it. The website of rsyslog is rather complex and not really attracting me to read it.  In essence rsyslog is just a logging mechanism. However it is so full featured, that configuration gets complex quick, a downside of powerful tools… I don’t want to have a complex logging setup, most people are looking for simple “hacks”. Like centralizing rsyslog output.

For example, I have an application I would like to have filtered out from_ /var/log/messages_, why ? Well /var/log/messages is full of “useless verbose/debug output”. In this example server (centos 7.1) I have messages from dhclient, chronyd, dbus, dbus-deamon, NetworkManager (euhk?), kernel messages from a IBM kernel module, …  So its pretty messy, I could filter out all applications, but many of these are essential and work together, hence when a problem occurs its easy to have them in one place. My application however, is not really connected to the “state” of the machine, While I could just create my own logging mechanism, other developers/sysadmins will first look in /var/log/*, so why reinvent the wheel ? My target : 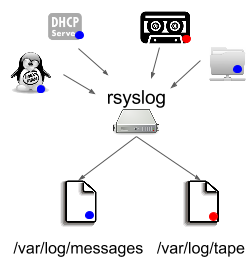 **Solution
** My application calls logger (/usr/bin/logger) with a  -t from tag (I guess). By default they are logged in /var/log/messages. It is however possible to filter them out and put them in a separate file.

The first line is going to look for “-t tape” and store them in /var/log/tape.log, the second line is telling rsyslog that’s pretty much it. Earlier versions of rsyslog also accepted &~ this is however deprecated, now the keyword stop seems to do it.

pretty sure there are cleaner ways to do it, but this works. Hooray for small easy hacks!