This is a project I have been working on for some time, I manage a phpBB 3.1 forum that is pulling some traffic -that is great- the problem : server is not following. I found the server (VPS) dead already a few times in the morning showing OOM errors, killing of MySQL or Httpd. Resulting in the forum being totally unreachable, bad for the site, bad for google results, bad for my rep. even worse for my honor as ad interim sysadmin.

Solving this problem can be very easy : throw in allot of cash and upgrade to larger VPS packet or dedicated server. Before I take that expensive path, I want to be sure I have squeezed everything out of the current hardware and configuration. I “know” four webservers : Apache, Nginx, lighthttpd and ISS. However, the last one is the windows one, I wanne stay far away from it (blind discrimination). Lighthttpd I know from memory, but I haven’t looked it up, and I -probably wrongly- think it focuses on dropping less-used features and being a stable simple webserver, hence the name, simple and stable is not my ballpark for this. Apache I have setup a few times for small websites, while I would not call myself experienced I am certain that I could fix most common mistakes. On Nginx I have read the story’s that it could be setup to be multiple factors faster then Apache, due to the way it works, however on most recommendations, I found that people gave the advice to use Apache, cause its simpler to setup/maintain. For the purpose of squeezing everything from setup I will go with Apache since I’m a bit experience with it and Nginx, as its large selling point is the increase in speed at a lower usage in resources.

Currently I am running vanilla Apache. The first thing to check if something is going slow is seeing what is making it go slow, the so called bottleneck. The stack is Centos 6.7, Apache 2.2, PHP 5.6, MySQL 5.1 and phpBB 3.1. Those in itself can be updated to the latest version, though updates rarely speed up application hugely unless a bug is known. Centos has not the bleeding edge new software and that makes them a good bet on being stable. They also update the software packages so that those huge bugs would be fixed regardless of the version.  So while updating could make some difference, I doubt that is where I am going to find the golden egg.  phpBB can’t be replaced in this case. (at-least that is not the preferred route)

There are some good tools online to test your application under load, sadly all the nice ones aren’t free. I don’t wanne go and spend a few hundred bucks on testing, that is simply not a option.  Ideally a load tester for phpBB should register user, post topics, read topics, edit topics, … most users don’t reload 100 times a same page … Still that is the only easy test I found. The tool Apache benchmark “simply” makes concurrent connections to the webserver. There are some alternatives, such as httperf, siege, jMeter, Tsung, gor, gatling, … all these tools are probably better then ab, but sadly take allot of configuration and work to get started with, I am going to try at-least a few of them but for now, AB has proven to be able to shoot the arrow straight in at my servers ‘Achilles’. Since I want to test multiple setups, I created a small bash script that will do a serie of ab tests.

The scripts writes output to result/ directory, this output I will later reuse. Since I ran this on a VPS with limited resources (2CPU/2GB RAM) I had to scale down to get load that would not crash the server to begin with. I don’t want to test long stability, so I took a tenfold of concurrent requests. I let the server stabilize for 15 seconds, to see some more spread in load peaks. 15 seconds is not long enough to drop to zero load, so there is a bit of overlap to be expected. This is a simple test that will put load on the server, so don’t run it in production (unless you want customers on the phone). Also note that there is a limit on concurrent request a client machine is able to produce, though these values don’t come even close to that number. (while 50 users sound little, its a good starting point) This is not a the best method, but it is a decent starting point in my opinion.

I have tested 7 setups :

Those setup form a basis for me to go into more specific setups. During the test I ran this simple bash script to get values on load/memory.

It will print out the load values so you could stop the test if the values get to high. (they did, sorry co-vps’rs)

I put every result file in a directory load_($test_nr) getting the data to something workable are a bunch of hacks. But I share them for the future me.

_note : I am no expert in this, these test have huge biases and are in no way close to how normal users would interact with your application/board. These values and results are not statistically correct. Don’t change stuff you haven’t tested. _

note 2 : While the production server has been running Centos 6.7 I took Centos 7.1_ to test run._

One of the ways to see how good or bad a server is doing is checking out the CPU load, this is a value that tells you how much CPU power has been used over a period (1, 5, 15 minutes). I set out the total run time against the load out. The total run time are the count(values)*5s since I had no easy way of setting it out I did not bother, so no exact values there.

First off, these loads are crazy. (this is the 1 minute load) since this is a 2 CPU VPS, a maximum load of 2 should be the target. (roughly two virtual CPU maxed out) I left out the first test, as the maximum CPU load was 0,03. That was to be expected, requesting static files with no processing on server side should not generate load on CPU.  The clean version (test 2) has a maximum load of 39,3 and ran the longest, while using memcache as forum cache (test 3) reduced the time it required to finish, the load is approximately the same. (max test 2 : 39,8). The largest win time wise, is using APC (test 4), it speeds up PHP execution hugely, also the CPU’s are slightly less stressed,  load maximum : 27,4 probably cause the CPU doesn’t have to make bytecode from phpBB’s code. In real life examples I don’t think the effect will be this huge under those load conditions, cause APC can’t predict, it can just keep bytecode of most used files. Since I still had a load ~20 fold the amount I can be sure to claim (VPS!) I needed to be sure to pull down the CPU usage, one way I found was to lower the MaxClients this will queue users that hit the server over the limit and as such make sure the server remains stable, by default apache comes with 256, this clearly is too much for dynamic PHP pages. I took arbitrary value 20 to see the effect on CPU. The result was astonishing, the CPU load kept below 5,6. Which is still about twice too high load, but its a good indication of what I can do with this parameter. Lowering it even more would put to much visitors in queue and result in very slow experience, to large value would result in to high CPU and eventually some service would give out and break. Perhaps this parameter should be combined with keep-alive. (more testing needed)

The results with Nginx where not significantly different from Apache, the load was 24,64 without gzip and with 25,33. The load was a bit lower then Apache : 27,4 (memcache was in both used and APC was active on both). This was somehow expected, while the technology of how Apache and Nginx handle the requests differ greatly, the most powerful feature, server side caching where on both Apache and Nginx omitted. I also have close to no experience with Nginx and as such purely on these results Nginx is not a clear winner. I am however not certain APC was active on the php-fpm (v : 5.4.16) I will test this later. The reason for not using server side caching, is simple : I hit a single PHP page that can be cached in the test, but in real world scenario can’t be cached long. That being said, a microcache such as is possible in Nginx might be very useful as multiple hits on the same page could be short-live cached and so making 100 hits on a single page could be pretty much be done from a 10 second cache. However the setup of something like that would be rather difficult without good knowledge of Nginx. (I am working on it !) CPU wise some more research is needed to conclude anything. Now most errors where memory wise, out of memory errors. So it might be good to see what exactly happens with the memory during the tests.

Testing memory is not as easy, while there is a tool free_ _that reads and parses memory usage, Linux/GNU is not as straightforward as : you still have memory/you don’t have any memory left. So for these values I used the “available” memory:  _free from procps-ng 3.3.10 (version) _:

Estimation of how much memory is available for starting new applications, without swapping. Unlike the data provided by the cache or free fields, this field takes into account page cache and also that not all reclaimable memory slabs will be reclaimed due to items being in use

The ab results gives me allot of data, but my doubt has become true. The data is not that useful. I parsed : requests per second, total run time and time per request.  I will only show a graph for the last one, as they are all pretty similar.

Showing pretty much what I expected from the CPU usage, APC is the only factor that really gives the server a boost. Making the static serving time come closer.

There is no such thing as a bad experiment or bad results, just bad use of the given data. This test was setup to give a raw idea of where to go. As such I have no experience with testing tools or testing a webserver to begin with.

While I keep on searching, feel free to comment or give advice!  All the data shown here can be accessed on google docs. 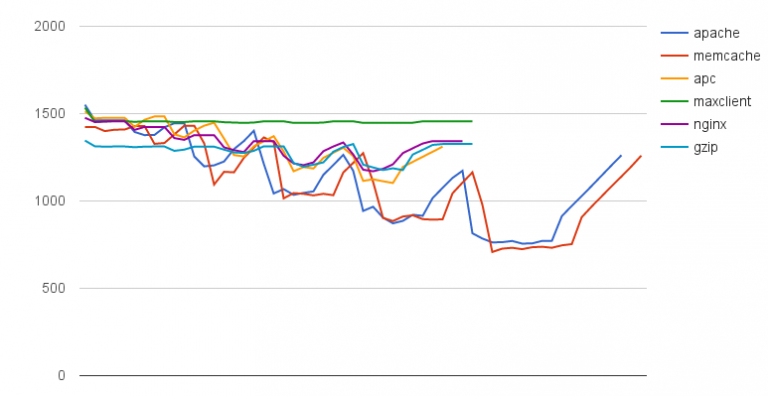 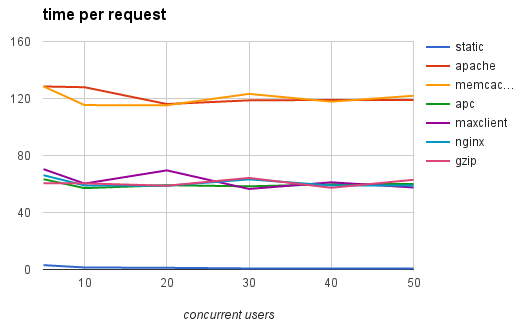 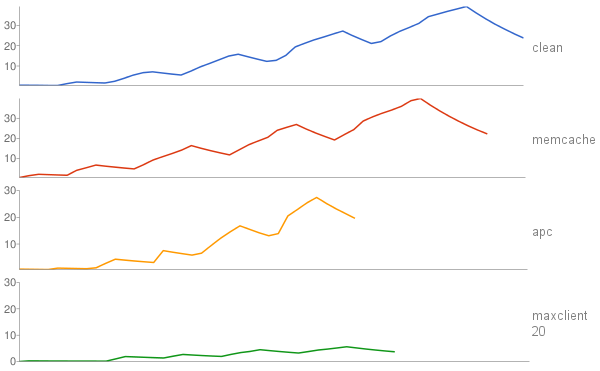 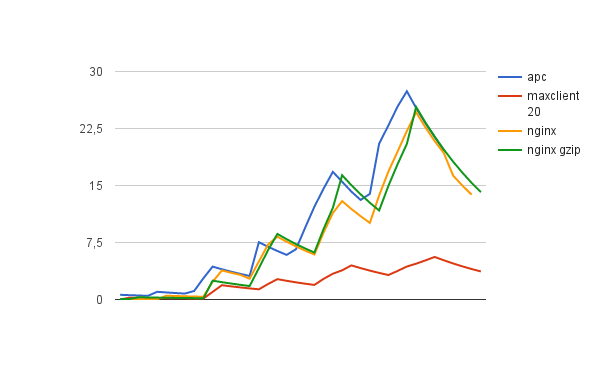